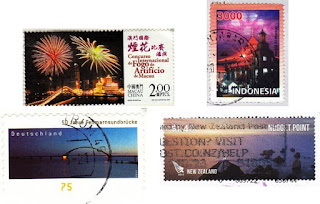 For fireworks and night views:

UL - Macau International Fireworks Display Contest, issued in 2004
This stamp has appeared here in my blog back to 4 years ago. It came with this postcard. That is probably my only postcard from Macau and this is my only fireworks stamp to date.

LL - A 2013 issue featuring the Fehmarn Sound Bridge. It is a 963-meter long bridge connecting the island of Fehmarn in the Baltic Sea to mainland Germany. The bridge is considered a historic monument but I can't find any further information from wiki as to the reason for such distinction.

UR - It's from a 2-pc set joint issue in 2009 between Indonesia and Iran. This stamp is the Indonesian face featuring Masjid Al-Markaz in Makkasar. It is a center of Islamic studies in the eastern part of Indonesia. Its architecture is patterned with the Grand Mosque in Mecca and the Prophet's Mosque in Medina.


LR - Almost of a night view, this 2013 stamp is from the Coastlines of New Zealand set of 5 issue. This is probably my favorite among these 4 stamps shown here in my page today. I love the aptness of the name for the tiny rocky islands and the mixed hues of yellow, orange, and blue as the background.

Visit See it on a Postcard for more fireworks and night view stamps features for today.