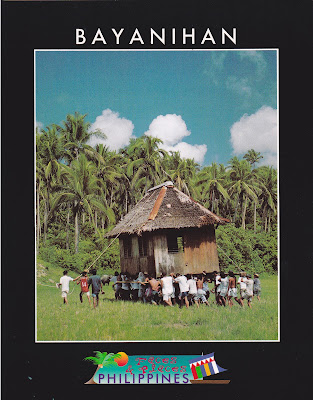 Speaking of traditional street scenes, I think nothing can be more traditional than this postcard of "bayanihan". Strictly speaking, it isn't a street, but since in the province where I grew up, cleared up pathways throughout grasslands were what we considered streets for passage of people and carriages pulled by either water buffalo, horse, or cow. Since traditional Filipino houses were built on stilts during earlier days, it's quite common to see men from the community gathering and helping a house owner who wants to move the property. These men weren't paid a cent but they're served a sumptuous meal and local alcoholic beverages after the heavy task. 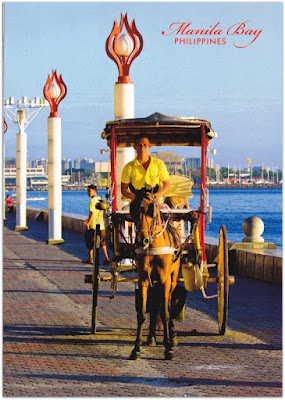 A horse-pulled carriage or kalesa. Nowadays, this kind of transportation is more of a touristy thing in many historical places of interest in the Philippines. This is one of the earlier forms of transportation, I reckon not just in my country but in many other countries as well. 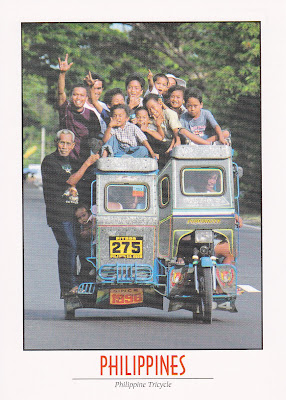 Now onto more modern street scene, on the above postcard is our version in the Philippines of a tricycle or trishaw. This transportation is normally overloaded with passengers as there isn't a lot of tricycles to transport people from villages to the town. This overloading happens mostly during when there are festivities in the town center.

Postcards for the weekend 38: Traditional festival


Although I don't totally agree with seeing these children in what seems to be heavy facial make-up, it appears that it is part of the over-all traditional costume. The back of this card reads:

Cheung Chau Island Bun Festival. The children in the procession are the stars of the Bun Festival. Aged between five and eight, they are supported on frames and carried shoulder-high throughout the whole parade to create an elaborate, often whimsical tableau, often representing characters in history or mythology.

This festival is celebrated on the eighth day of the fourth month in Chinese Calendar. It usually coincides with Buddha's birthday (April/May).

Despite my increasingly overwhelming tasks at work and frequent business trips, one of the reasons why I keep on writing about my postcards collection is the mix of emotions I get whenever I review my postcards album. Just like with this postcard, it's kind of hard to believe that it took 2 months to reach me! Wow! Having moved to Singapore, the postcards I receive normally traveled only for a week or two. I don't understand why most of my received postcards, while I was still in the Philippines, seem like they traveled forever to reach me when my home is less than 30 minutes by car from the post office ... well, okay, fair enough, perhaps the postman is always stuck in heavy traffic!

Moving on, this postcard shows the celebration of the Day of Belarusian Written Language in Kamenets. I didn't have the chance to find out on what year this took place. For this year, this festival will take place in Polotsk. Belarus is celebrating 500th Anniversary of the Belarusian Book Printing this year, 2017. More information on this festival can be found here: http://www.belarus.by/en/about-belarus/culture/den_bel_pism_en


I'm quite pleased with the assortment of postcards I found for the theme this weekend: featuring children, to grown-ups, to animated creatures. This third and last postcard shows the Ptuj carnival called Kurentovanje. This carnival is celebrated to preserve the tradition for the ancient rite of spring. It usually lasts for a period of eleven days and consists of music and dancing, with the Kurent groups in masks with feathers and horns. I found this excellent page about the carnival, containing a detailed explanation about the masks and the costumes: http://www.slovenia.si/culture/tradition/kurents/

This theme educated me about traditional festivals that I'm sure I wouldn't have known at all if not for these postcards. Have a nice weekend everyone although it's a nay for me as I'm working both on Saturday & Sunday.

Postcards for the weekend 37: Traditional costumes


I did a little research about Portuguese traditional costume for women and found out that although it typically varies by region, normally it consists of bouffant long skirt for women. The skirt is called saia and is of vibrant checkered or striped pattern. Well I shouldn't be surprised myself, hailing from a country that was a Spanish colony for 300+ years! The same item of clothing is called saya, in my lingua franca.


Diana, the sender wrote that this young lady is wearing a traditional Lithuanian costume and is seen here making a bird from yarn. 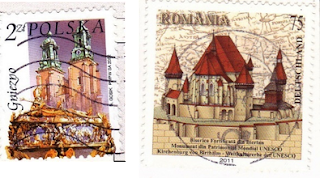 The stamp was issued on 1 March 2002. It is also showing the coffin with relics of St. Adalberg.

The Cathedral of Gniezno, according to wikipedia, served as the coronation place for several Polish monarchs and the seat of Polish church officials continuously for nearly 1000 years.

The stamp was issued on 11 September 2011. The Fortified Church of Biertan was declared as a UNESCO World Heritage Site in 1993 under the category: villages with fortified churches in Transylvania.

For more places of worship stamps, visit See it on a Postcard.

I had to do a research to learn more about this postcard. It's awesome to find information on another blog about postcards: Remembering Letters and Postcards -- spinning flax on a drop spindle. I would love to see this way of doing textile done in person!


It has been a habit for me to take back souvenir(s) for my parents whenever I travel. I was literally smitten with a handmade tablecloth with lace and embroidery. Oh man! It was heavy. We bought it earlier during the day and we had to take it with us for the rest of our sightseeing. No regrets though as I'm sure my parents will be pleased when they see it with the matching napkins.

I'm so excited to see the other postcards that feature traditional craft work this weekend. Enjoy visiting each and everyone in the linky party!