I've read in one website that 90% of the Earth's population are in the northern hemisphere. It's logical as it is because of the land mass concentration.

For the northern hemisphere theme for Sunday Stamps this week, here are stamps from China -- the most populous country on Earth. The stamp design on the left is from the Huangmei Opera set of 3. The two other designs and the description of the series can be found here. On the right is of the Prime Minister Zhuge Liang. This design is called Devotion to Service. Information about the rest of the sheet can be found here. For the prime minister, here.

Postcards for the weekend 26: Serenity

This post is quite early for this upcoming weekend. I am anticipating intermittent internet access. I will be in my home island for a delayed birthday celebration with my family.

For the serenity theme this weekend, I've chosen first this card -- a woman with a tranquil countenance in her senior years,

finding serenity in solitude; the liberty to be still, enjoy a good calming cup of tea, meditate, or slowly read a good book with lighted scented candles nearby, and

in renewing faith in each deep breath we take while witnessing the beauty of creation.

Have a great weekend everyone and I sincerely would like to express my gratitude to all bloggers and friends who have been very creative with the postcards shared for our themes this month of February. 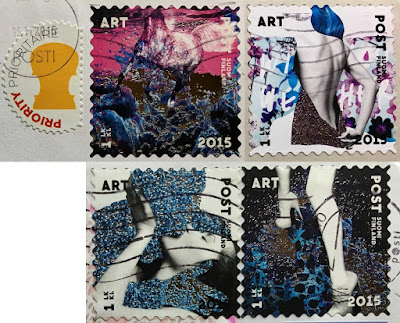 Received in three different occasions, I'm happy to discover that I have all four stamps from the miniature sheet called Art Post 20--15. It was released by the Finland Posti on 11 September 2015. The four designs are by the creative agency Vanhatapio and Saksi. The theme for the designs are "cinematic and literary references that allow the imagination to create the set and setting for events".

Click on See it on a Postcard to discover what other participants shared for the theme, eastern hemisphere.

Postcards for the weekend 25: Gratitude

Searching for postcards to share for this weekend's theme reminded me of the interconnectivity of these four themes I've chosen for this month of February. Please forgive me if the cards might seem redundant with the emotions they convey ...

...gratitude for being outside in nature under the warmth of the sun

...gratitude for having food and drinks on the table


...gratitude for seeing and receiving a present from a good friend.

Happy weekend everyone and looking forward into seeing your postcards,
~maria

According to reference.com, the United States of America is always included in the list of western hemisphere countries since such a small portion lies in the eastern hemisphere. As such for my contribution to Sunday Stamps this weekend, I'm sharing USA stamps I received with famous American personalities from the field of literature and performing arts. 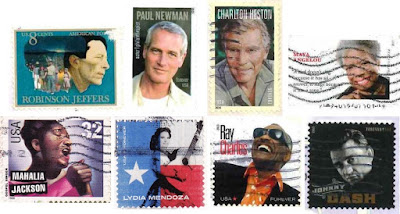 1973 August 13 8 cents stamp, Robinson Jeffers
A poet and an icon of the environmental movement

2013 May 15 Forever USA, Lydia Mendoza
A pioneer of American-Mexican music

2013 June 05 Forever USA, Johnny Cash
One of the most influential musicians of the 20th century

Postcards for the weekend 24: Love


I don't have the words to describe these gestures of love and affection ... 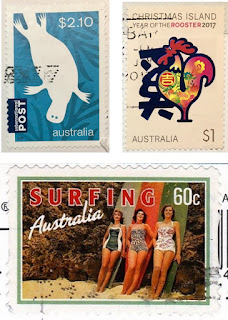 The four themes for this month of February for Sunday Stamps hosted by Sanna @ See It On A Postcard challenge my geographical recall ... pretty exciting! The first theme is southern hemisphere. According to wiki, the entire mainland of Australia is in the southern hemisphere.

One of the iconic Australian animals is the platypus (Ornithorhynchus atatinus). On the 2016 issue above, it's shown against a background of its native foliage.

Integral to the Australian identity, too is surfing. The 2013 stamp is one of four domestic base-rate (60 cents) commemorative issued for the 50th Anniversary of Surfing Australia.

Again, according to wiki, Chinese Australians are one of the largest groups of overseas Chinese people and largest in Oceania as of 2011. For Chinese people around the world, the Lunar New Year begins on 28 January for 2017. Australia Post issued two Christmas Island Year of the Fire Rooster stamps this year. The $1 stamp is above and the other one, $3 stamp can be seen here.

Head over to Sanna's page for more stamps from the southern hemisphere.

Postcards for the weekend 23: Happiness


For more than 20 weeks, we have seen creative twists with the theme interpretations. I would love to mention each and every notable ones I've seen. I'm afraid this post won't fit on this page at all though if I do so! In line with that observation, I decided to be more inclusive for the themes this month of February. I realized it might be quite challenging, but let's see what are the postcards the four chosen emotions will bring us. To start with -- HAPPINESS.

Aside from being in the company of love ones and friends, I noticed that I'm very happy whenever I'm surrounded by nature. My job needs me to talk and listen with many different people most of the time. Nature does not ask that of me; listening to its sounds is voluntarily ... for the talking part, I guess I kind of do self-talk whenever I see something queer or fascinating. Overall, it's a rush of happiness whenever I see colorful birds, butterflies, dragonflies, beautiful blooms, huge and ancient trees whenever I go for nature walks. At some places, the foliage is the same as my last visit. Regardless, the great experience remains the same!

For this theme of happiness, I'm sharing these three reproductions of Mary Cicely Barker postcards. It's impressive how happiness is reflected on the faces of each fairy on the postcards. And oh, that youthfulness! My partner told me that he often notices that I'm the happiest whenever we do something outdoors in nature. Well, it always give me the sense of adventure and freedom -- best cure for anxiety!


I hope these postcards are able to make you happy, too!