Yesterday, I came home with a really annoying headache from a long and bad day. But what a surprise! My mood was really turned 180 degrees when I saw this postcard on top of my study table. ;-) I fancy postcards with smiling faces. The sender didn't know that cause he's not from the official postcrossing website nor he has been a swap partner from any of the Facebook postcards exchange groups.

Later in the evening when I had the chance to tell him that his surprise card arrived, he told me that when he saw the card in a postcards stand, he instantly knew that it's the perfect card for me. Oh well...he's someone who never fails to make me smile -- so I believe, it's the perfect card to get from him, too!

Myanmar has the old name, Burma -- which is the home of two early civilizations in Southeast Asia, Pyu and Mon. Its official name is The Republic of the Union of Myanmar, which can be seen on the stamp which came with the card.

The dominant religion in Myanmar is Theravada Buddhism. Boys in Myanmar are highly encouraged to study early Buddhism as a novice before they turn 20, and to be a monk after that. The back of this card of novice Buddhist monks says, SMILE. And indeed, their smiles are contagious!

Happy Postcard Friendship everyone and have a happy weekend! Smile. :)

Thou hast brought me many flowers

Beloved, thou hast brought me many flowers
Plucked in the garden, all the summer through
And winter, and it seemed as if they grew
In this close room, nor missed the sun and showers.


So, in the like name of that love of ours,Take back these thoughts which here unfolded too,

And which on warm and cold days I withdrewFrom my heart's ground. Indeed, those beds and bowersBe overgrown with bitter weeds and rue,

And wait thy weeding; yet here's eglantine,Here 's ivy!—take them, as I used to do

Thy fowers, and keep them where they shall not pine.Instruct thine eyes to keep their colors true,And tell thy soul their roots are left in mine. 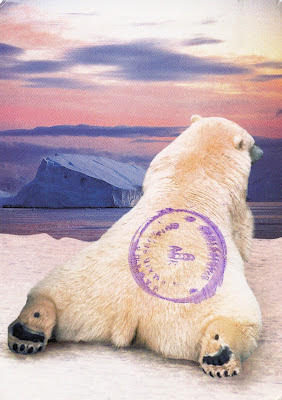 I just fell in love with this postcard when I received this. But lo and behold! That postmark right on the body of the polar bear. I wanted to stage a protest against the central post office for ruining (kind of) my postcard! But I reckon I calmed myself by thinking that such marks on the postcard gives it character -- the postmark is the evidence that the card traveled far and long, but finally, it has reached the end of its journey.

Looking longer at the card, I ask myself what the polar bear is thinking about, with the setting sun and the chunk of sea ice at a distance. Global warming, perhaps?

I am sharing this card with Beverly's Pink Saturday blog roll. Happy weekend everyone! 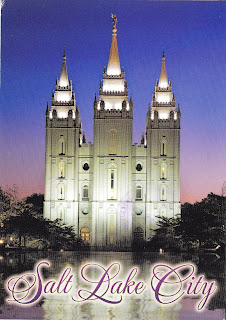 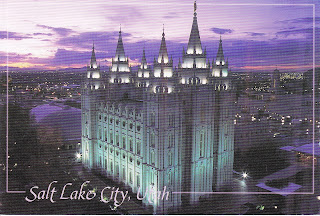 The temple is the centerpiece in the 4 hectares land called the Temple Square in Salt Lake City, Utah. It is the largest and best known temple of The Church of Jesus Christ of Latter Day Saints.

The construction of the temple took 40 years. Works in the interior however, took only 1 year to finish. The exterior of the temple is richly adorned by symbolism depicting "mankind's journey from mortality to the eternal realms". One of these is the standing angel statue which can be seen atop the middle spire on the first card. The Salt Lake City Temple is the first Mormon temple to feature a standing angel Moroni statue. The angel Moroni is "the messenger of restoration of the gospel and the herald of the second coming" as mentioned in Revelation 14:6. For more Salt Lake City Temple symbolism, please visit the LDSChurchTemples.com.

Happy Postcard Friendship Friday everyone! Check out Bette's page for other cards for PFF!

*Friendship Gift Postcard are received cards, which are not from arranged swaps/trades. 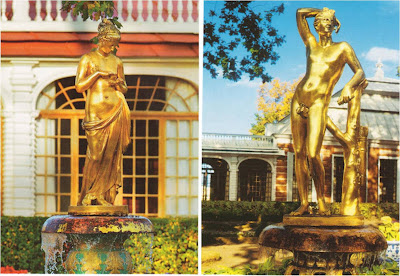 These two golden statues are among the many that fill the imperial estate of Peterhof. Found in the UNESCO heritage site of St. Petersburg, Russia, Peterhof is also referred to as 'the Russian Versaille'.

The construction of the majestic estate was commissioned by Peter the Great. Works began in 1714, to what was then known as Monplaisir -- 'my pleasure'. The way the imperial estate looks now is different to what it looked like in Peter's time though. A lot of additions were made by his granddaughter, Elizabeth of Russia, with the help of the Italian architect, Bartolomeo Rastrelli

Peterhof means Peter's Court in German. Such name was coined to the place during the World War II. The post-war name is Petrodvorets after the reconstruction, possible with 1,000 volunteers and military engineers in 1947. 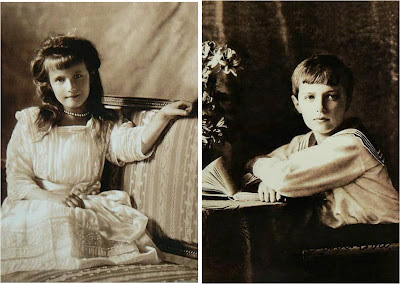 The photos featured on both cards are from 1913.

To the right is Alexei Nikolaevich, Tsarevich of Russia. He was the youngest and only son of Emperor Nicholas II, and heir apparent to the throne. He only lived up to almost 14 years old.

To the left is Grand Duchess Anastasia Nikolaevna of Russia. The name Anastasia is translated as 'the breaker of chains'. When she was born, the emperor released student prisoners who were involved in riots during the previous winter.

The alleged escape of Alexei and Anastasia from the assassination of the imperial family on 17 July 1918 gave rise to quite a number of personalities claiming to be the Tsarevich and the Grand Duchess. All claims were nullified in 2007 when a Russian archaeologist announced the discovery of what was scientifically proven to be the remains of the two.

Happy Postcard Friendship Friday everyone! Click the meme below to see what other postcard lovers shared at Beth's page for this week. 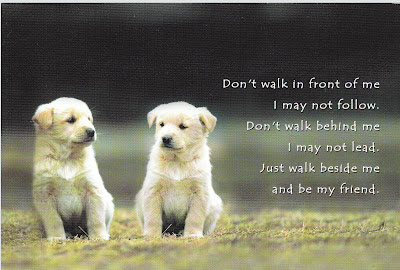 The sender, Maya said that the quotation on the card is her favorite.

May the cuteness and the message on this card set the mood for your entire week, folks!

Now, hop onto Willa's page by clicking the meme below for another beautiful postcard to start the week! :)

Cards from Yuki of Japan

There's a nice story behind these cards.

I saw the first card with the dancing girls of Japan from my random browsing of the postcrossing website. I contacted the sender of the card, Yuki. We agreed for a swap and I got the card on 22 Nov 2011. 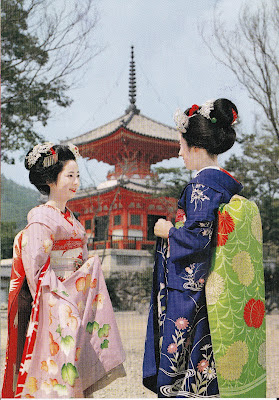 The Maiko, or dancing girls of Japan preserve the traditional feminine charm of the kimono. In the card above, they are standing in front of a Buddhist pagoda at the Daikakuji Temple, Kyoto. 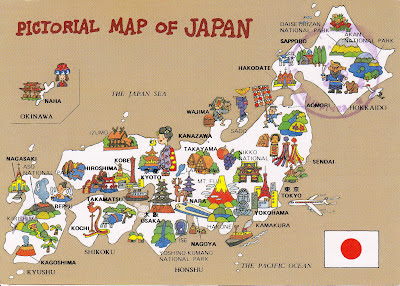 Two months after, I received an official postcrossing card...and to my nice surprise, the sender is the same Yuki who sent me the Maiko card from Nov 2011.

If you examine the map closely, you will see that the pictorial marker for Kyoto is a woman wearing a kimono. I was curious whether the cards were from the same printer, but no. The Maiko card was printed by NBC Inc. and the map card was by Asahi card. I guess Kyoto is really famous for the Maiko and the Daikakuji Temple, then!

Thank you so much Yuki for sending these cards to me.

Pardon me,  Beth. This is a late post also for your Postcard Friendship Friday.