For this weekend's theme, I'm featuring city views at day time from Europe:

The old buildings in Helsinki City Centre gave me peace and calm. I truly wish I had more than just a 2-day weekend to discover this European capital city. If I'm not mistaken, the tall building in the background is St. John's Church. It stands out tall compared to the rest as it's resting on a hill.


Some of you may know that I have a Dutch mom (my biological mother is Filipino but I have a second mom). She sent me this postcard from the city where she works. I will visit Amsterdam this August and I'm figuring out if it's worth it to visit The Hague as well. I like this postcard for showing a contrast of old and new buildings.


Madrid ranks high on my list of cities I want to explore in depth in Europe. Here's Metropolis Building, an architectural wonder at the corner of Calle Alcala and Gran Via. The building features 4 statues representing Mining, Agriculture, Industry, and Commerce. Its round tower is covered by 30,000 leaves of 24-k gold.


Of all these five postcards, this is my favorite. I reckon this picture is taken close to the golden hour. I probably wouldn't have known about Ljubljana if not for this postcard. I don't know how to pronounce this city's name either so I need to ask Google for help.


This postcard steals my attention from that of Ljubljana. The buildings are way so much taller at one part of this city. Excellent vantage point for this postcard!

You spoke, and I listened :D Starting this weekend, the time span of the linky is extended to 12 hours more, to accommodate different time zones. 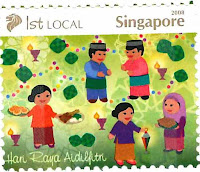 We're enjoying a 3-day long weekend here at the moment to celebrate Hari Raya Aidilfitri. The stamp was issued on 29 February 2008.

Apart from the much awaited long weekend to celebrate Hari Raya Aidilfitri, the entire month of Ramadan is a source of inspiration for me. For the past 3 years of witnessing the tradition here in Singapore (partly in Malaysia as well), the dedication and discipline of my Muslim friends during the hours of fasting made me revisit my own spirituality at the same time. The sense of community and atmosphere of festivity specially during sahur and iftar, made me yearn for my immediate family back in the Philippines but at the same time, blessed me with friendship and deeper understanding of the Muslim faith -- specially on those occasions that I was invited to dinner, which more often than not, was coupled with intelligent conversations.

Postcards for the weekend 43: Iconic person


Her Majesty Queen Elizabeth II, needless to say, she's such an icon of all monarch figures. It's sad that the postcard is damaged on top of her right eye ...

A lone postcard post this evening, folks. I'm too tired both from work and domestic series of unfortunate events. I published an entry 20 mins ago, only to realized that the city view (day time) theme is for next weekend! Glad I noticed before I go to bed!


I didn't know anything about European Capital of Culture until I visited Malta 2 months ago. It was quite well advertised around Valletta, Malta's capital. In fact, I first saw the information on this postcard! My partner, being European himself, explained to me that every year, European Union has a different city, designated as the main venue to highlight European culture. This aims to boost focus and attention into European culture, as much as there's always big discussions about politics and economics.


Valletta is a UNESCO World Heritage Site. It was the city of the Knights of St. John and has been described as "a city built by gentlemen for gentlemen". It's built to a grid pattern on a narrow peninsula, offering wonderful urban views and historical sites at almost every corner. Among its major attractions are the Church of St. John, the Manoel Theatre, and the Grand Master's Palace.

50th Anniversary of the Jardim Botanico Madeira
Issued in 2010 (Portugal)

Singapore, my second home is a garden city. One of the most admirable features of this garden city is the lush greeneries lining the roadsides. Left to right --

For Sunday Stamps: gardens or forests

Postcards for the weekend 41: Flags, with a flag(s)


Finland is the latest addition to the list of countries I've visited so far. I went there during the third weekend of April to meet my pen friend from Kuopio. It was a lovely meeting and I learned that Finland is celebrating its 100 Years of Independence this year. This card arrived with a matching stamp for the flag on the postcard.


The trip to Finland was a side trip that I made as a part of my business trip to Gothenburg, Sweden. Less than a month prior to my trip, I received this card from Monica of Beyond the Lone Islands. Thanks to Monica's message at the back, I was able to properly select the clothes needed for the cold & wet northern European weather. It was so much colder in Gothenburg as compared to the April weather I remember from my first visit in 2015. And oh, my side visit to Helsinki gave me my first ever hail storm and wet snow fall experience! I finally saw snow! Some of you might remember that I was ranting about it in one of my posts after missing it from my Japan trip back in November 2016.

Thanks to these two cards, I learned that all Nordic countries except Greenland have adopted the Nordic Cross flag.


This postcard has appeared here in my blog 5 years ago. I noticed it in my scanned postcards folder while looking for postcards for our theme and decided to narrow down my search to flags with cross/crosses on it. There's a long article in wiki about this flag and it's quite an interesting read for those who are interested in their national and political history.


As I'm sure most or all of us know, the Union Jack emblem exist on the National Flag of Australia, the country being a member of the Commonwealth. On the London, the capital of England and the United Kingdom card above, we have the widespread Union Jack, the flag of UK as a bright and beautiful backdrop. The Union Jack is a union of three historical crosses: Saint Andrew's, Saint Patrick's, and Saint George's.

The similarities of the Nordic country flags to that of the Union Jack has made me very curious. My research has landed me into a well-written article in Quora. Apparently, the Nordic cross gave rise to the flags of the British Isles, among which are the historical crosses that currently comprise the Union Jack.

I learned so much while researching about the postcards I've chosen for the theme this weekend! Yay!

Postcards for the weekend 40: Country map(s)

My interest with Ireland started when I saw a very entertaining animated film with a leprechaun when I was a little girl. I always thought Ireland is Ireland ...


... But when I traveled to Scotland back in 2012, I learned that Ireland has two parts: one being the Republic of Ireland, and another being North Ireland, part of United Kingdom.


That was my very first out of Asian continent trip. I visited a relative in Edinburgh after attending a conference in Glasgow and he asked me whether I plan to see Ireland as well. I was very surprised as I thought, "How can I go there when I only have UK visa and no Schengen visa." Then, I was educated on the two Irelands ... Ah, the things I couldn't have learned if not for actually making a trip to somewhere!

What are some of the memorable unexpected learnings from your travel(s) abroad?