I came across a very informative post about the mini-series containing this stamp while researching about it. The post can be found here. Saves me some typing time (wink).

I would say though that I love how the Eiffel Tower is depicted with brushstrokes here against a bright red sun. Simple yet beautiful fusion of French and Japanese icons.
Posted by Maria at 10:12 PM 4 comments:

According to this website, Japan's International Letter Writing Week issue is an annual series since 1958. It has the aim of contributing to world peace by encouraging cultural exchange between people of the world through writing letters.

The stamp designs for the year 2013 and 2014 were from The Fifty-Three Stations of the Tokaido and one more painting by Utagawa Hiroshige that were not featured in the past. Hiroshige-san is considered as the last grand master of the https://en.wikipedia.org/wiki/Ukiyo-e Japanese woodblock prints and painting.

For more stamps with the letter "I", visit See It On A Postcard

Sunday Stamps - (I) Ingmar and Ingrid from Sweden 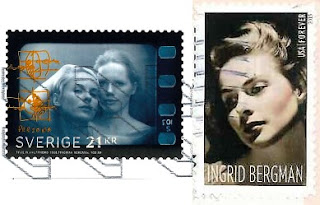 For the letter I - Ingmar Bergman and Ingrid Bergman

Searching for stamps to feature for the letter I, I was intrigued when I saw these two Bergmans. They share the same family name but are not related to each other. They shared professional work in the film industry though.

The stamp on the left is one of the two designs issued by PostNord in commemoration of the life of Ingmar Bergman. He is considered to be among the most accomplished and influential filmmakers of all time. The film, Persona, featured on this stamp is considered by Bergman himself as one of his most important works.

Thanks to Monica of Beyond the Lone Islands for sending me a postcard from Boras, Sweden with this stamp.

On the right is Ingrid Bergman, also famously known as Ilsa Lund, her character in the film classic, Casablanca. Ingrid is in the list of 100 Famous Actresses of Hollywood's Golden Era (1930 - 1959).

For more stamps with the letter "I", visit See It On A Postcard

P.S. As I'm still locked out from my linky account and I'm yet to receive a response from the page administrator, I decided to step back and cancel the recommence of the Postcard for the Weekend linky. I deeply apologize for the false excitement over this.

Postcards for the weekend 89: Anything you wish


It's been almost 4.5 months now since I took a hiatus from blogging. I didn't totally stop from exchanging postcards though and I have plenty of beautiful postcards to share! Postcards are probably one of those things that I would always love despite the fact that I'm needing more and more storage boxes to keep them neat and tidy.

So the Postcards for the Weekend has now officially resumed. HOWEVER, I'm having issues with the linky tool. Pardon me! I will update this post as soon as that's sorted out.

I hope you've all been well and I'm looking forward to another series of beautiful postcards party! 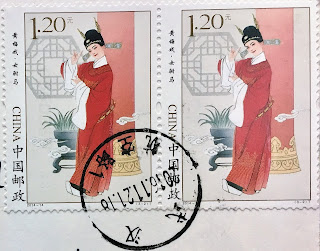 Released on 6 July 2014, the picture on this stamp is entitled "The Emperor's Female Son-in-Law". This is one of the grand plays staged for the Huangmei Opera. Huangmei Opera traced its origins from 200 years ago in the rural parts of China, among which are Anhui, Hubei, and Jiangxi provinces. The costumes used in the plays are less extravagant as compared to other forms of Chinese opera. The focus was more on the tone and the beautiful singing. Storylines mirrored reality and that's why it has won the hearts of the audience. Huangmei Opera is in the list of China's national intangible cultural heritage.

P.S. The Postcards for the Weekend re-opens next weekend. Woohooo! It will be open by 12 AM, 13 Oct and close by 12 NN, 15 Oct. It shall follow the same schedule every weekend from then on. As before, there will be a different theme for each weekend while every first weekend of the month will always be dedicated for anything you wish to share. Hope to see more beautiful postcards from all deltiologist bloggers! Thanks to Eva of Mail Adventures for encouraging me to restart this linky! Cheers x
Posted by Maria at 3:55 PM 7 comments: