Postcards for the weekend 48: Philippines

I'm finally back in Singapore after a 3-week outstation work. I'm happy to end this Saturday with a dinner together with a friend from the Philippines. He's here for a business trip and since there are no Filipino restaurants in Beijing (where he's based now), we decided to eat at a Filipino restaurant. Talking in Filipino and about the Philippines made me miss home even more. Hence, this weekend, I'm sharing scans of postcards that I sent out in the past while I was still based in Manila.

There are three main island clusters for the Philippine archipelago. Luzon in the north, Visayas in the middle, and Mindanao in the south. Let's start from the north -- 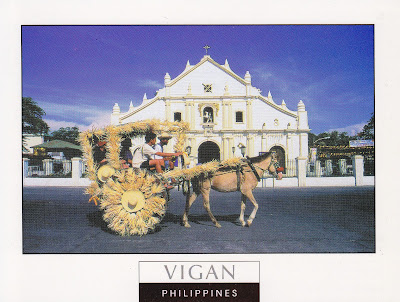 Vigan is a city on the northwest coast of Luzon. It's a popular tourist destination due to its well-preserved colonial Spanish narrow streets and buildings. On this postcard is Vigan Cathedral, a part of the UNESCO World Heritage Site declaration for the City of Vigan. 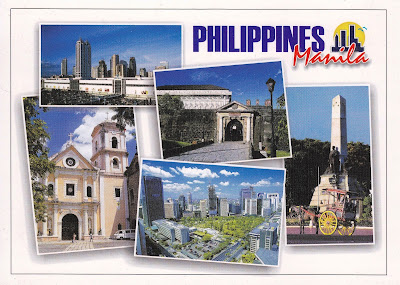 The capital city of Manila is on the same mainland Luzon as Vigan. Luzon is a long stretch of land mass and the distance from Vigan to the nation's capital, Manila is approximately 405 km. On this muti-view postcard, we have a glimpse of old and new buildings in Manila. And oh, there's the monument of our national hero, Dr. Jose P. Rizal. 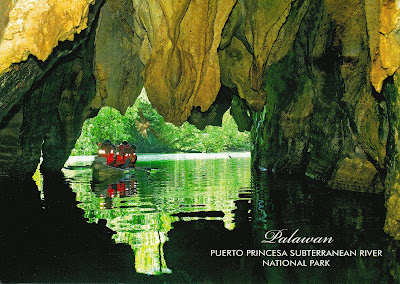 An island to the southwest of Manila is Palawan. Here's a subterranean river national park postcard from Palawan's capital of Puerto Princesa. 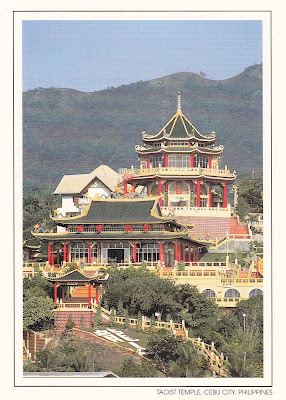 From the center of the Philippine archipelago: Visayas, there's the beautiful city of Cebu. Here's a postcard of a grand Taoist Temple, that is open both for worshipers and non-worshipers. I had a great time exploring the place back in the year 2012.

And from the south -- here's a dance called dugso. 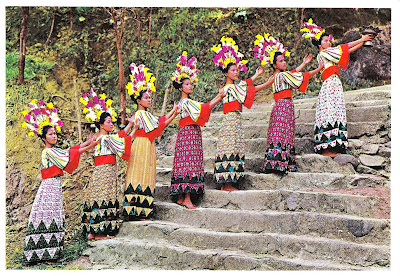 Its origin is the mountainous province of Bukidnon in Mindanao. It's a dance of thanksgiving and invocation of protection. The dancers wear colorful costumes in local patterns, wear equally colorful headdresses, and bell anklets to which they dance with the rhythm.

Happy weekend everyone! I hope you enjoyed these postcards from my home country.

P.S. We will have no linky party for the first 2 weekends of August as I will be on a holiday. We will resume on the 3rd weekend of August. Ciao everyone!

Postcards for the weekend 47: Bridges


Nedi, the sender of this postcard wrote: This picture is the seventeen-hole bridge. It's one of the famous scenes at the Summer Palace in Beijing.

I love this scene captured during the golden hour.


Here's a winter view of Blick vom Johannapark, at the Leipzig city center. I must admit, finding bridges within city parks & gardens always thrills me. There's that adrenalin rush of getting from one side to the other, regardless how relatively small of an accomplishment it might seem.


Now, this last postcard means so much to me. It was hand-delivered to me by a colleague when she came back to the office from her Australia trip. At the back was written, "Sometimes people need to fall apart, to realize how much you need to get back together. You just need to believe that everything happens for a reason and God has bigger plans for you! Hang in there!!" This postcard was pinned to my office cubicle where I can see it every day while facing my laptop screen. That year, 2014, was tumultuous, to say the least -- this postcard was one of my links to sanity.

I'm sure you folks have noticed the delay in my weekend posts. It's been a real challenge for me these couple of weeks with responsibilities at work. At the moment, I'm finally on my last week of a 3-week series of trips from Kuala Lumpur, Hanoi, and now here in Jakarta (moving to Malang on Wednesday!). After that, I'm back to Singapore for 1 week and then I''m off to the foot of the Alps, for a 2-week break. I'm hesitant about this, but I really need a time off from electronics & gadgets so I decided that for 5 & 12 August, I won't be hosting the linky. However, if someone would want to substitute for me on those 2 weekends, please let me know in the comment and I will pass the HTML codes for the link-up platform.

Hope you're all having a free & easy weekend,
~maria

Postcards for the weekend 46: Places of worship


I had my first ever hail storm experience on my way to this cathedral back in April. My friend Tuija who sent me this postcard and who was with on that same day of the hail storm, wrote: This stunningly beautiful church is Helsinki Cathedral and most probably the most beautiful in Finland. I was only able to look at it in awe both outside and inside!


This is probably one of my postcards that took the shortest distance to reach me (see caption). It's a Postcrossing Meet-up Postcard featuring the Basilica of St. Martin de Tours. It is considered the largest church in the Philippines and in Asia.


In my opinion, this is the best building in Kampong Glam, a historic Malay area in Singapore. I always love sitting at a cafe at night and just marveling at the beauty of this mosque. The website YourSingapore describes this mosque as the focal point of Islamic faith in the country.


Will you believe that this Hindu temple is located in Chinatown? It is indeed! Sri Mariamman is the oldest Hindu temple in Singapore. The number of sculptures & figurines at its entrance is just awe-inspiring. More so, is the social role this temple plays in the life of South Indian Tamil Hindus. I read that this temple provides them shelter until they find work and a more permanent accommodation in Singapore.


This card is from my solo weekend trip to Ho Chi Minh last year. It was such a traumatic trip though and I vowed that I will never go back to Vietnam on my own again. I am sad to give this bad impression of Ho Chi Minh but my experience was pretty terrible. Oddly enough, I'm writing this blog post while here in Vietnam at the moment. Only at a different city though, Hanoi.

I'm sorry for disappointing my blogging friends for my tortoise-ness with the linky. It's been really insane at work. I've just finished organizing and hosting a regional distributors sales meeting. I went back to Singapore for one night and back on the road again today. I'm away for another 2 more weeks for this series of business trips. I hope the rest of you are able to enjoy less demanding days.


The Taipei 101 skyscraper clearly towers above any other building in the city on this scenery. The temperature of the print on the translucent material on this screen postcard offers a somewhat close to reality view of the city of Taipei. This first postcard is the fanciest I own to date.

This is Ginza Street in Tokyo at night. The entire street with its neon lights was just magnificent and breathtaking when I saw it for real back in November 2016.


Singapore Chinatown is recognized as one of the cleanest Chinatown all over the world. Seen here in the foreground is the Tooth Buddha Relic Temple and behind are the tall buildings in the cental building district of the city.


Behind those buildings on the Singapore Chinatown is the iconic Singapore Merlion. It's always very nice to visit Merlion Park in the evening as the area is full of lights.


And for this fifth postcard, here's one from Metro Manila -- a city where I lived for 11 years before moving to Singapore. This is a skyline of Makati, the central business district area. I worked for 5 years on the 29th floor of the leftmost building called RCBC Plaza.

I'm sorry everyone for the late posting this weekend. I'm organizing a regional sales meeting at work, happening this Tuesday to Thursday (wish me luck!)