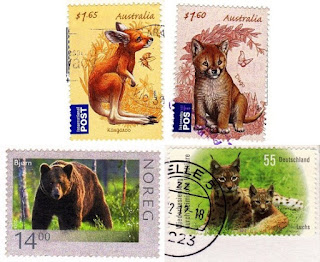 I'm quite pleased to share these wild animal stamps where two are illustrated and the other two are actual photos.

The two stamps on top were part of the series Australian Bush Babies. The kangaroo was issued in 1 July 2011. I can't find the exact issue date for the dingo, though. The illustrations were designed by Elise Martinson. Other stamps from the series can be found on her page. I find these illustrations well-detailed and it seems like they're out from the pages of a nice children's book with a beautiful story about animals in the wild.

On the bottom left, the bear stamp was issued 21 February 2008 as part of Wildlife in Norway III series. The label Bjorn on the stamp is an old Norse term for bear. On the bottom right, we have a lynx with its young. It's issued in 2012 as part of Native Animals series from Germany.

For a collection of stamps featuring wild animals, please check See It On A Postcard.