Antibes at the French Riviera


The beau sent this postcard from when he was studying in Antibes. I'm not sure if it was in 2010 or 2011 (we were still not a couple back then). But I think, it was 2010 because at the back of the postcard, he was talking about a postcard with the Eiffel Tower. But this postcard never arrived. He said it might had been stolen in transit since it was in a beautiful pink envelope. It really made me sad thinking about a lost Eiffel Tower postcard because it should have been my first from France. Thankfully, last year, he was back to Paris and sent me another one. :)

Antibes boasts one of the beautiful sea side resorts in the French Riviera. It was founded during the 5th century BC by Greeks. It was called Antipolis, or the city across. It saw destructions and renewals through ages. In mid- 19th century, it became popular to wealthy Europeans as vacation spot with its beautiful beaches and rich cultural heritage.

I always imagine myself touring Antibes: visiting museums by day, the Musee Picasso is first on my list, finding a treasure at the antique show, boarding a colorful boat in a procession on the sea for the Festival of Saint Peter, climbing up the hill to Garoupe Lighthouse to enjoy the best view of the region, getting lost at the Explora Park, and soothing my senses with wine and jazz music at the end of each day.

It's a nice coincidence that this postcard I got features a similar view to that one posted by Mr. Wiki. The caption Bord de mer à Antibes means sea in Antibes.

I am linking up with Paulita for the first time at the An Accidental Blog for the Dreaming of France meme. Check out her page to discover other wonderful things bloggers who dream about France are sharing this week by clicking the Eiffel Tower below. I am also sharing it for Sally's Blue Monday, accessible through the blue bird meme. 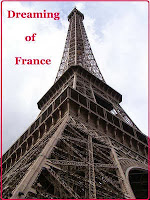